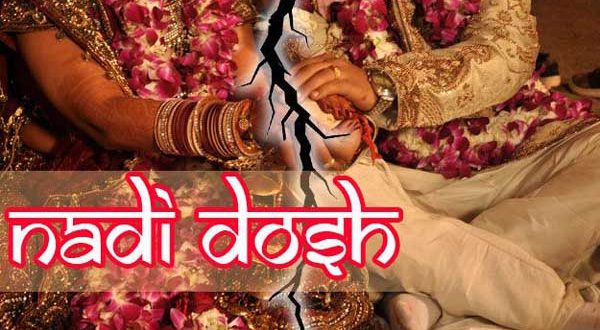 Nadi is one of the important Kootas in matching Gunas for the purpose of marriage in Vedic Astrology. It indicates health compatibility and out of the maximum of 36 points in a marital match has been allocated the highest number of 8 points. The very fact that Nadi has been given maximum points also signifies that it is regarded as the most important factor by astrologers. The Nadi mainly shows the success of marital life and about the progeny in the future.

It is a very serious imperfection which is potent enough to cause many problems in the married life of two partners. If the native ignores this advice and decides to proceed with the marriage anyway, the resultant issues range from the couple feeling low to no attraction towards each other, in some cases in separation, certain serious health-related issues, infertility, serious life-threatening situations for mother or child during or after birth of child and could even result in the death of the partner. This is why it is undoubtedly the most feared Dosha among all defects which are formed during the process of Guna Milan.

Nadi is determined by the placement of the Moon in the natal chart and the Nakshatra in which the Moon is placed for the individual, at the time of birth. Following is the distribution of Nadis according to Vedic astrology as decided by the presence of Moon in specific Nakshatras in the birth charts of different natives:

Kundali Reading for Marriage of the two prospective partners for marriage detects this Nadi Dosha which occurs when the Nadi of the two proposed partners happens to be the same. According to Varāhamihira:

In most cases, Nadi Dosha is not capable of causing serious damages in the marriage of a couple on its own. The formation of Nadi Dosha during horoscope matching can cause significant problems in the marriage of a prospective couple, only if such Nadi Dosha is supported by certain other malefic defects present in one or both the horoscopes. It is equally noteworthy that, the presence of good Yogas in one or both the horoscopes can alleviate the bad effects of Nadi Dosha to great extents and as a result, this defect may not cause any significant damage in such a marriage.

Some Yogas which serve as exceptions, wherein, Nadi Dosha is said to be nullified in horoscope matching for the prospective couple if any of the conditions mentioned below are met:

It should also be noted that the malefic effects of Nadi Dosha can be rectified with astrological remedies like Poojas, Yantras and donations in most cases, which gives us all the more reason for not being afraid of Nadi Dosha. Below are the Nadi Dosha Remedies:

The fact is, remedies are not about investing blind faith or based upon pure superstition. Neither is it a last-ditch attempt to come out of a situation where nothing else has worked or helped solve the matter. When an astrologer tells you to do remedies involving philanthropy of any kind towards humanity, be it, helping others who are going through a bad time, or donating essential items or money to the needy, or giving unconditional emotional support to others. In reality what the astrologer is trying to do, is create new good karmas for you, which by no means would shield you from the problems you are going to face and endure because of karmas created previously but these new good karmas will help you enjoy good times in your life and your relationships as well, either in this or in the next life based on your Karma account balance.

It is therefore unnecessary for prospective couples with Nadi Dosha detected at the time match-making, to stress out and lose heart! There are umpteen number of happily married couples and have been blessed with healthy children, who have Nadi Dosha which was nullified due to the presence of benefic Yogas in their natal charts. Divinity World recommends to get their horoscopes analyzed in a holistic and comprehensive manner in order to know whether such Nadi Dosha is capable of causing significant damage or not, based on the various criteria and conditions detailed above.

Can A Manglik Marry A Non-Manglik ?
Is The Matching Of Kundali Enough To Secure A Happy Married Life ?