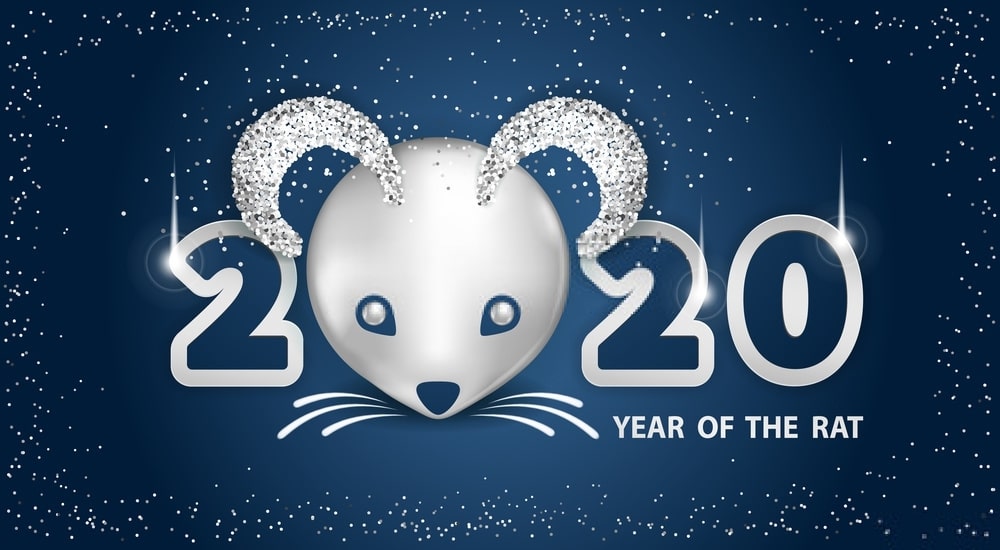 The Rat is the first of all zodiac animals. According to one myth, the Jade Emperor said the order would be decided by the order in which they arrived to his party. The Rat tricked the Ox into giving him a ride. Then, just as they arrived at the finish line, Rat jumped down and landed ahead of Ox, becoming first.

The Rat is also associated with the Earthly Branch (地支—dì zhī) Zi (子) and the midnight hours. In the terms of yin and yang (阴阳—yīn yáng), the Rat is yang and represents the beginning of a new day.

In Chinese culture, rats were seen as a sign of wealth and surplus. Because of their reproduction rate, married couples also prayed to them for children.

Rats are clever, quick thinkers; successful, but content with living a quiet and peaceful life.

Paired with the Celestial Stems (天干—Tiān gān), there is a 60-year calendrical cycle. Although zi is associated with water, the years also cycle through the five elements of nature (五行—wǔ xíng).

See the table below for the full details of each year.

Optimistic and energetic, people born in the Rat year are likable by all. They are sensitive to other’s emotions but are stubborn with your opinion. Their personality is kind, but due to weak communication skills, their words may seem impolite and rude.

On the financial side, they like saving and can be stingy. However, their love for hoarding will sometimes cause them to waste money on unnecessary things.

Men born in the Rat year are clever and adapt quickly to new environments. They are creative great at taking advantage of opportunities. However, they sometimes lack the courage to do so. Although they have great ideas, they might not be suitable for leadership positions.

Women born in the Rat year are the traditional women. They love keeping things organized and place great value on the family. Everything is taken care of by them and there is no need for their husband to worry. Outside of home, they’re also someone with a sense of responsibility and ability.

Rat’s fixed Earthly Branch is water, while Ox is earth. They complement and help one another in both work and life.

Couples that are formed from Rat and Dragon will be able to understand each other well, and enjoy success together.

Similar to Dragons, Monkeys get along great with Rats, and tend to live happily ever after like a fairytale.

The Earthly Branches of Rat and Horse clash strongly. No matter what a Rat does, it won’t be enough for the Horse.

Goats are attracted to Rat’s wealth and hope to control it, making it a rocky relationship.

The Rabbit will either purposely or unintentionally go against the Rat’s wishes, while the Rat can only keep silent.

Because of their independence and imagination, they are suitable for creative jobs. These include authors, editors and artists. However, if they join a team, their creative outlet may be blocked.

Rats also pay attention to fine detail. They are fit for technical work, such as engineering and architecture.

They are alert, but have a lack of courage. This makes them unsuitable as police officers, entrepreneurs or other leadership and political positions. Although Rats make good financial decisions, they should be careful not to invest with a close friend. It will not only cause money problems, but also affect the friendship.

Since childhood, Rats have frail health. They have energetic personalities, but tire quickly. They catch colds often, but thankfully do not have serious illnesses.

They are sensitive to change in temperature. Not only is cold weather unbearable for them, they also can’t stand hot weather. But despite seeming weak and not being able to perform hard physical work, they enjoy longevity.

Rats can eat anything, whether they are delicacies or plain food. However, they should pay attention to their diet. Many times, they will get too into work and forget to eat. Going long periods without food and suddenly bingeing cause problems in their digestive system. Enemies of their health also include smoking and drinking habits.

For a healthy life, Rats must remember to eat breakfast, do moderate exercise and remain cheerful.

Although a zodiac’s year is traditionally the most unfortunate, laden with bad omens and mishaps, 2020 will perform reasonably well for the Rat. Success will come in the form of career; celebrate the fact that your efforts will be rewarded and seen. On the other hand, your health and relationships will prove to be a struggle. Visit your doctor at the first sign of illness, and work toward creating a loving, open environment for all of your relationships. The year will have its issues, but the positive factors can turn it around.

Even though the year will be a challenge in many areas, the Rat’s career will not be among them. Success will flourish in the workplace, yielding benefits of all kinds. Hard work will be rewarded; your clever skills, quick-thinking, and optimism will drive you forward. Exclusive bonuses will come to those born in the first half of the year. Rats born in the following months will have to push a bit harder for their goals.

Finances will be booming for the entirety of the year! Your income might even double. It would do you well to save and invest your hard-earned money. Try to avoid spending it all on luxurious items and vacations. Instead, splurge on little experiences here and there. Take your family to a theme park or your husband on a dinner date. Your girlfriend might enjoy a trip to the fair.

The Rat will maintain a decent academic standing in their educational studies. Hard work will be valued and necessary. With the right amount of focus on your studies, you will surely meet your goals. Be wary of your well-being; stress over your course schedule might get you down and even cause illness. Avoid sickness by pairing vitamins with at least seven to eight hours of sleep and proper nutrition. Although you might want to enjoy a full social calendar, it would be better to take some downtime to recuperate.

Vulnerable to sicknesses, like colds and fatigue, the Rat will have to be extra careful in 2020. At the first sign of symptoms, head to your general practitioner immediately. The faster you get medicine and the treatment you need, the quicker you will heal. To stay healthy, do your body a favor and eat more proteins and vegetables; boost your immune system by adding vitamins to your diet as well. As a general rule, proper diet, exercise, and sleep keep one healthy.

Luck is also not in your favor this year for love. Romance will be hard to come by for married couples and singles alike. You will face many struggles throughout the year; however, your innate positivity will help you push through hard times. If you’re single, it is best to avoid longing for a partner this year. The likelihood of finding someone long-term is very low. Instead, have fun and enjoy the freedom of not being tied down romantically. Enjoy light conversation, some partying (but not too much) and meet new people. Take this bad news and look for the bright side!

The same misfortune goes for married couples; be on the lookout for challenges in your relationship. Petty arguments, financial battles, or suspicions might plague your love-life. When these issues surface, don’t let them fester. Deal with everything head on to experience a better year. Focus on the love you have for your partner; this person is your home, your safe zone, and your beloved. Keep yourself grounded in love.

Rats will experience both successes and failures in the Year of the Rat. Success will show itself in the workplace and education, while relationships and health will be the areas that suffer. Overall, the year has a far better outlook than one’s typical zodiac year suggests. Rats should rejoice in their good fortune. Their natural ability to create success is a gift, a gift that will prove itself in financial gain. If you are feeling nervous about the year ahead, protect yourself with a Buddha statue. And have hope for good times to come amidst misfortune.