The Chaldeans were ancient people who ruled Babylonia from 625–539 BC. Therefore, this system is also known as the Babylonian numerology system. The basis of Chaldean Numerology is that each letter has a unique vibration and is assigned a number from 1 to 8 based on its energetic quality. It recognizes the energy changes that occur when you or someone else speaks or thinks. The sound of someone speaking comes out in vibrations of different frequencies that affect the speaker and those around them. In this type of Numerology, the single digits reveal the outer nature of a person, while double digits describe inner qualities of a person.

The Chaldean system uses the numbers 1-8. The number 9 is not used in the system because it is regarded as sacred due to its connection to infinity. The number 9 was sacred not only because it was symbolic of the highest level of spiritual attainment, but also because its level of creative energy was higher than all other numbers. It is however possible for the number 9 to be the end result in these numerology calculations.

The Chaldean system is used on the name that the individual is currently using, and not necessarily the Birth name, because that is the energy that would currently be projected in daily life. Then, each letter is assigned to a number one to eight, based on the Chaldean numerology chart. The Chaldean number system assigns them based on the vibration of each letter, instead of the position it has in the alphabet. The numbers are assigned to letters of the Latin alphabet as follows: 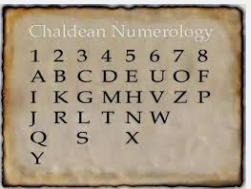 The Chaldean system recognizes the numbers 11, 22 and 33 as Master Numbers. The master numbers do not get reduced to single digits. In the Chaldean system, an individual’s first name is their social persona and how they present themselves in public and the energy that comes with that. The first name also indicates the individual’s personal interests and habits. The middle name is the soul energy and it reveals the truth about your inner soul and the deepest parts of yourself. The middle name shows the hidden talents, desires, and what your soul is trying to reach for. The last name is related to the domestic influence of the family.

While you can apply the same methodology to date and time of birth, place of birth, current residence, phone number, and so on and so forth, the Chaldean Method dives deep into certain immensely insightful numbers and their significance and interpretation. The Chaldean numerology methodology focuses on the following major number combinations:

Each single number, compound number and master number have its own meaning and significance for the individual’s nature, personality and destiny. Let’s look at what numbers 1-9 represent:

Divinity World has conducted a comprehensive study of the various number systems showing the numerical values assigned within the Latin alphabet below, which gives a holistic view of how the Numerology systems stack up together:

How To Calculate Your Life's Most Important Numbers Through Numerology ?
What is Numerology and How it can Impact Your Daily Life ?
Ancient Secrets Revealed Of How Pythagorean Numerology Works !