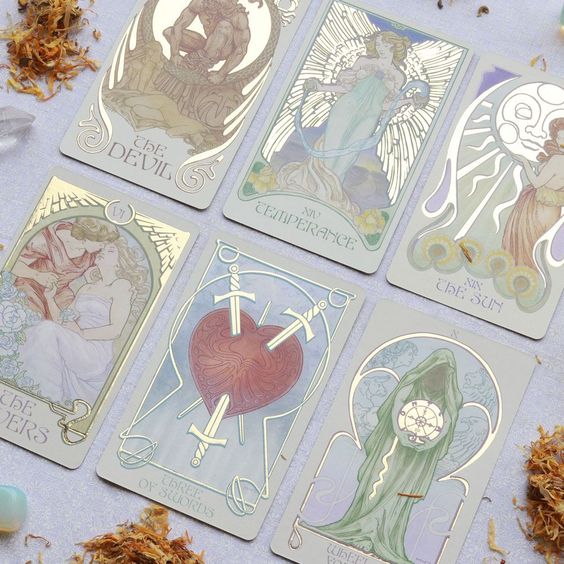 The standard tarot deck has 78 cards, and each one has its own imagery and symbolism. The cards are split into two categories: 22 Major Arcana cards and 56 Minor Arcana cards. Here’s the lowdown on each:

The Major Arcana cards represent monumental, groundbreaking influences. They punctuate our journeys and each stands alone as a powerful message, representing life-changing motions that define the beginnings or ends of cycles. These dynamic cards appear during major transitions, signalling distinctive moments of transformation. The cards are numbered to represent stations within our greater journey through life; their chronological order reveals the passing of time.

The 56 Minor Arcana cards, on the other hand, reflect everyday matters. These cards showcase ordinary people engaging in mundane activities, such as dancing, drinking, sleeping, or quarrelling. They suggest action that is triggered by human behaviors and appear during gentle transitions that may be temporary or have only minor influence.

The Minor Arcana cards are made up of four tarot suits that focus on different parts of our lives, each containing ten numbered cards and four court cards. In the Minor Arcana, the card’s number reveals the stage of an event: The ace card represents the beginning, while the 10 symbolizes the end. Similarly, the progression of the court cards demonstrates our understanding of circumstances on an individual level, representing either personality types or actual people. These suits reveal which spheres of influence are being activated, offering guidance on how to best manage any circumstances at hand.

Shuffle and question your deck for a tarot reading

Understanding the general meaning of each card is just the beginning. The real power comes in using the cards to tap into your own intuition and wisdom so you can start taking positive steps into a brighter future. Generally, a tarot card reading follows a simple format. First, you need to ask the card deck a question. It should be clear and open-ended. For example, avoid asking questions that begin with “Will I…,” as they run the risk of locking you into a passive role in your own future. The idea is to use the card reading to illuminate a path forward, so ask questions that are broad. Here are recommendations on how to approach framing your questions:

Once you have the question in your mind, it’s time to shuffle—and there are multiple ways to do so. The overhand shuffle involves holding the deck of cards in one hand and using the other to move cards from one side of the deck to the other. You can also “cut” the deck by dividing it into several piles and then combining them into one again. Or you can try spreading the cards face down on the table and sweeping them into a big, messy pile before tapping them into place again. There’s no right or wrong way to shuffle.

A single card can be selected for a simple reading or several cards for what’s known as a spread. Instead of answering one question, tarot spreads can speak more broadly to a situation or life path. Once you’ve chosen your card or cards, lay them face down in your spread. Then, turn them right side up so you can gaze at their words, symbols, and imagery, paying attention to what comes to mind as you go.

Tarot spreads are the patterns in which the cards in a tarot deck are laid out for the reading. Each layout has an energy of its own, and each card within the spread represents an aspect of the reading as a whole. The most common and widely used types of the hundreds of possible tarot spreads are: